Bordered by China in the north and India in the west, east and south, Nepal is a landlocked country of South Asia. Eight of the ten highest mountain peaks of the world are situated in Nepal, including the mightiest one, Mt Everest. There are almost 250 mountain peaks in Nepal, which is elevated over 6096 meters above sea level. Besides, this country has a record of densest area with large number of UNESCO World Heritage Sites. From leisure to adventure trips, Nepal fulfils the wish of each type of travellers.

Places to visit in Nepal 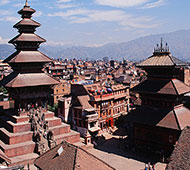 Kathmandu is known as Kantipur, the kingdom of Nepal. Here you will visit the temple of the living Goddess, who acknowledges the greetings of her devotees from balcony of her temple residence, Kathmandap-the source of the name Kathmandu. It was allegedly made from the timber of a single tree. Next, on to the Durbar Square area with its array of temples overlooked by the Hanuman Dhoka Palace, the ancient palace of the Nepalese Royalty. 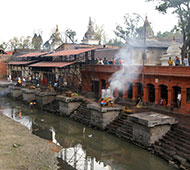 Lying 6 Km from central Kathmandu, Pashupatinath temple is one of the holiest Hindu temples dedicated to Lord Shiva. Situated amidst a lush green natural setting on the bank of the sacred Bagmati River, the temple, which was built in pagoda style, has a gilded roof and beautifully carved silver doors. Visitors will be permitted to view the temple from the east bank of the Bagmati River, as entrance into the temple is strictly forbidden to all non-Hindus. Pashupatinath is the centre of an annual pilgrimage on the day Shivaratri, which falls in February or March. Behind the temples are the cremation grounds. 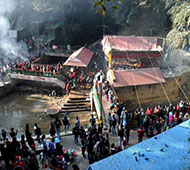 Literally meaning the Kali of the south, this temple is dedicated to the Goddess Kali, the Hindu goddess of power. Goats, chickens, ducks etc. are sacrificed on Tuesdays and Saturdays. The temple itself is located in a forested canyon and lies 19 Km. from Kathmandu. 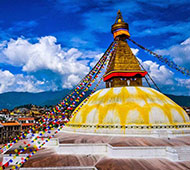 This stupa, situated 11 Km. from the center of Kathmandu, is one of the biggest in the world of its kind. It stands with four pairs of eyes in the four cardinal directions, keeping a lookout for righteous behaviour and human prosperity. This Buddhist stupa was built by King Man Deva at the advice of the Goddess Mani Jogini. It is built on an octagonal base and is contains inset prayer wheels. The shrine is surrounded by the homes of Lamas, or Buddhist priests. 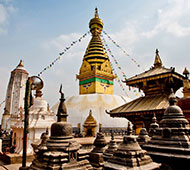 Located approximately 3km from the center of Kathmandu, this Buddist stupa is said to be 2000 years old. The stupa which forms the main structure is composed of a solid hemisphere of brick and earth which supports a lofty conical spire capped by a pinnacle of gilt copper. Painted on the four sided base below the spire are the all seeing eyes of Lord Buddha. The whole area around the stupa contains an array of small stupas and temples. This is one of the best places from which to view the Kathmandu valley, as it is situated on a small hillock. 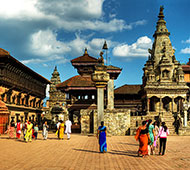 Also known as Bhadgaon meaning the city of devotees, this place is the home of medieval art and architecture. Lying 14Km east of Kathmandu city, this place was founded in the 9th century and is shaped like a conch shell. The city is at the height of 4600 ft. above sea level. In Bhaktapur you will visit the Durbar Square with its array of temples overlooked by the palace of 55 Windows built by King Bupatindra Malla, the Nytapola Temple. This temple, which was also built by King Bhupatindra Malla, is the best example of the Pagoda style and stands on five terraces, on each of which stands a pair of figures, famous strong men, elephants, lions, griffins and goddesses. Time permitting, a visit to the museum of Thanka painting can also be considered. A 30 minute walk brings you to the Dattatraya temple and Pujari Math which can also be done provided there is plenty of time at the clients' disposal. 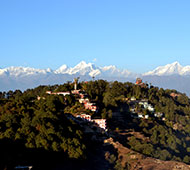 It is situated about 35Km. east of Kathmandu city and from here one can see Mt. Everest and other peaks of the Himalayas. Nagarkot is located between Kathmandu valley in the west and Indravati in the east.

The top of Nagarkot commmands accelerating views in all direction. The altitude of Nagarkot is 2229Mt. above from sea level. It is also very popular for the viewing sunrise and sunset. 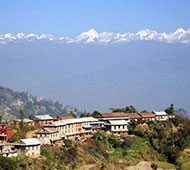 It is situated at an altitude of 1600 m. above from sea level and 32 Km. from Kathmandu City. Dhulikhel is famous for its vantage location in viewing the Himalayan ranges, from Cho Oyu in the east to Himalchuli in the west. It is popular for viewing the sunrise and sunset. 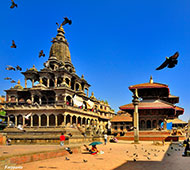 5 Km. away from Kathmandu city. Patan, also known as Lalitpur, is a city of fine arts, enclosed within 4 stupas, which are said to have been built in the 3rd century A.D. by Emperor Ashoka.

A trip to the Tibetan Refugee Centre and the Handicraft Centre will be included during your visit to Patan, where you will witness the hand weaving of Tibetan carpets and molding of metal statues. There are many other places to visit which are:

Pokhara is Nepal's second most popular tourist destination and its adventure capital. It is overshadowed by a massive wall of the Himalayas, and dominated by the towering peak of the Annapurna range. Even more impressive is the fishtailed pinnacle of Mt. Machhapuchhare (6977 m) For the adventurous, the massif of Mt. Dhaulagiri (8167m) waits to be explored. Pokhara is the starting point for the most famous treks in Nepal, in the Annapurna area. Pokhara is situated 200 K.M. west of Kathmandu.

What to See in Pokhara Valley

Phewa Lake : The second largest lake in the kingdom, this is the center of attraction in Pokhara. The eastern shore, popularly known as lake side, or Baidam, is the favorite hangout for travelers, and is where most of the hotels, restaurants, and handicraft shops are located.

Begnas & Rupa Lake : The lakes offer the perfect natural retreat because of their relative seclusion. Splendid boating and fishing oppertunities can be had here.

Barahi Temple : The most important religious monument in Pokhara, built almost in the middle of Phewa Lake, this two storied pagoda is dedicated to the manifestation of Ajima, the protectress deity who represents the female force.

Seti Gandaki : Flowing right through the city, this turbulent river runs completely underground in places. Amazingly, at certain points, the river hardly appears to be two meters wide, but it is quite deep, up to over 45 meters.

Devi’s Fall : Locally known as "Pataley Chhango", this is an awesome waterfall lying about two km. southwest of Pokhara airport. Legend has it that a trekker (Devin David….) was washed away by the Pardi Khola (river) and mysteriously disappeared down into an underground passage beneath the fall.

Mahendra Gupha (cave): Another of nature's wonders in Pokhara is the Mahendra Gupha. This large limestone cave is locally known as the house of bats, which is an apt name for it. A two hour walk to the north of Pokhara, it is best to bring your own torch in order to see the stalactites and stalagmites, as well as the local winged residents. 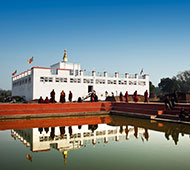 The birth place of Lord Buddha.
Nepal is as well known to the world as the sacred birth place of Lord Buddha as it is famous for its mountains and monuments. It attained a high level of civilization and prosperity, and its acclaim is well deserved. Buddha was born into a royal family. Immediately after his birth, he took seven steps in the four cardinal directions, and wherever he set foot, a divine lotus flower bloomed.

The main attraction at Lumbini is the Secred Garden, which is spread out over 8 sq km and contains all of the treasures of this historical area. The Mayadevi temple is the main attraction for pilgrims and archaeologists alike. Here we find a bas relief that shows Mayadevi, the Buddha’s mother, giving birth to him. Standing west of the Mayadevi shirine is the oldest monument in Nepal, the Ashoka Pillar. The pillar was erected by Emperor Ashoka in order to commemorate his pilgrimage to the sacred site. 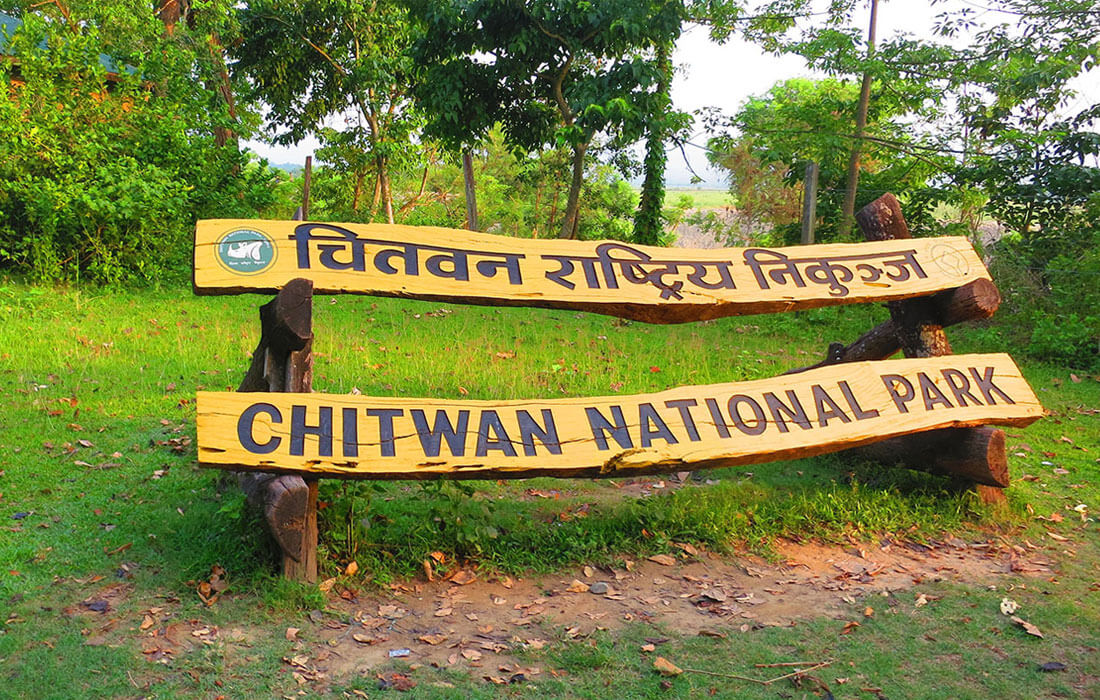