Eastern Bhutan is one of the slightest investigated districts of the kingdom and offers one of most bona fide encounters for experience situated sightseers. The whole area is flooded with untainted characteristic excellence, towering bluffs and unblemished woodlands with awesome varieties in height and climatic conditions.

Places to visit in Eastern Bhutan 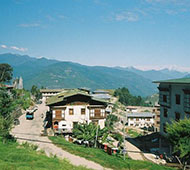 Like many other settlements in Eastern Bhutan Mongar town is situated atop a hill rather than within a valley. This town is considered the main trade and travel hub of eastern Bhutan and most travelers and merchants active in East pass through here often spending the night at one of the local hotels. The main street is lined with traditionally painted stone buildings with wooden facades and verandas. Near the clock tower there is a large prayer wheel around which people often gather to meet old friends and chat. The local restaurants offer a decent variety of Bhutanese and Indian cuisine. 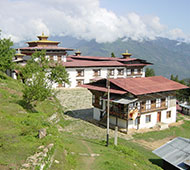 Although built in the 1930s and one of Bhutan’s newest Dzongs, it was constructed in the same way as all earlier dzongs, without plans or nails.

However unlike the earlier Dzongs, that are located in strategic positions, Mongar Dzong is located on a small gently sloping area just above the town. A visit to Mongar Dzong demonstrates how traditional Bhutanese architecture has continued to thrive through the centuries. 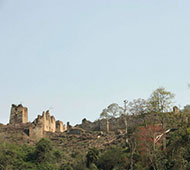 The ruin of Zhongar Dzong endures to this day as a testimony to the skill of its builders, most notably the renowned master craftsman, Zowo Balip. It is located on a hilltop overlooking the village of Themnangbi and is visible as one descends to Lingmenthang from the highway. Constructed in the 17th century, the Dzong is believed to have been built at a site where the master architect Zow Balip saw a white bowl.. A visit to the ruins can be a memorable experience and will give you a sense of medieval Bhutanese administration. 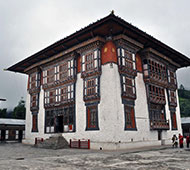 One of the most notable religious sites is Dramitse Lhakhang. It was built in the 16th century by Ani Cheten Zangmo, the daughter of the renowned Terton (religious treasure seeker) Pema Lingpa. The Dramitse Ngacham or the “Dance of the Drums of Dramitse,” was created in this lhakhang in the 16th century. Today, it is a popular dance performed at all major festivals. It is also on the esteemed UNESCO World Heritage list. 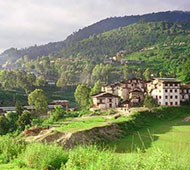 Another sacred site in the district is the renowned Aja Ney. Pilgrims from all other parts of Bhutan converge here to receive blessings and wash away their sins. A rock that bears 100 renditions of the sacred syllable “Aa,” is said to have been discovered by Guru Padmasambhava. It is located at an altitude of more than 3,500 meters and falls under Ngatsang geog. It is located approximately a two day trek from Serzhong village. 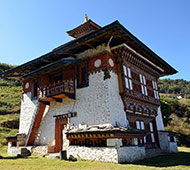 The Yagang lhakhang in a small village next to the town is another sacred monument in the Dzongkhag. It was built in the 16th century by Sangdag, the youngest son of Terton Pema Lingpa. It was built after the Kupijigtsam Lhakhang in Yangneer village in Trashigang was completed. Today, the lhakhang plays an important role in the religious life of the people. 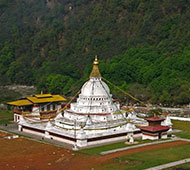 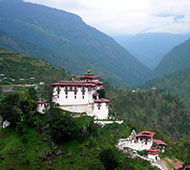 This mighty fortress, popularly known as Lhundub Rinchentse sits upon a hill overlooking the Kurichu River. It was constructed in 1654 by the Trongsa Penlop Chogyal Minjur Tempa upon the site of an older temple built by Nagi Wangchuk in 1552. Today the dzong is the administrative and the religious centre of the district. It houses many sacred artifacts that were installed by the 4th Druk Desi Tenzin Rabgay. 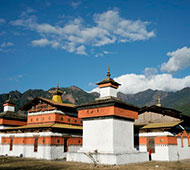 The tiny village of Kilung is a twenty minute drive from the Dzong on the route towards Kurtoe Dungkharg . This village is inhabited by the Tshanglas who migrated and settled here during the late 1880’s. In the village you will come across the Kilung Lhakhang situated on a ridge overlooking the Kurichu River. It was built on the former site of the Kilung Gyalpo, a regional chieftain. This temple houses the sacred chain mall that was once used to recapture a statue that miraculously flew away from the Lhuentse Dzong. 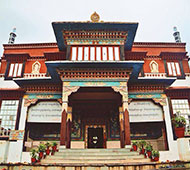 This is another monastery that is definitely worth paying a visit. It was founded in the 18th century by Pekar Gyatso and until recently was under the patronage of the 16th Karmapa Rangjung Rigpe Dorji. The daughter of 1st King, Ashi Wangmo lived here at the monastery as a nun. The monastery is easily accessible from a feeder road. 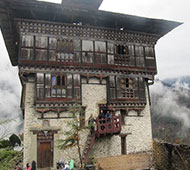 The house of Dungkar, one of the noble lineages from Kurtoe was home to the Trongsa Penlop Jigme Namgyal, the father of the Wangchuck dynasty. Dungkar Naktshang the ancient home of the Dungkar Chojie and the ancestral home of the Wangchuck Dynasty stands amid a scenic backdrop of towering mountains overlooking the tiny Dungkar village below. There is a 40km dirt road from Lhuentse leading up to Dungkar Lhakhang. The Dungkar expedition is an exciting and magical voyage into Bhutan’s past. 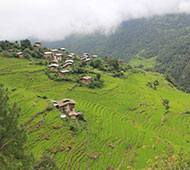 Gangzur village is situated around two kilometers from the Dzong. . This village is famous for its pottery as its women folk are skilled artisans of this dying art. The Government is now making efforts to revive it through financial support. When in Gangzur you will definitely want to witness the women displaying their skills. 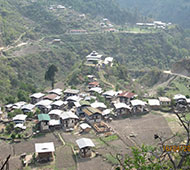 This village is located about two hours walk from the Dzong. It is a pleasant journey taking you over gentle slopes amongst pine trees. This village is known throughout the country for its signature woven textile, the Kishuthara. The women sit in a row a makeshift textile cottage, weaving intricate designs and patterns. Picking up a Kishuthara here will be much cheaper than buying one from the handicraft shops in the capital. 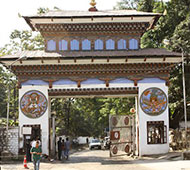 The gate way to Eastern Bhutan, Samdrup Jongkhar is situated in the south eastern region of the country and shares borders with the Indian state of Assam. It is by far the largest urban center in eastern Bhutan. It lies at elevations ranging from 200m to 3,500m. In the past, many British Political Officers stationed in Sikkim took the route from Samdrup Jongkhar to enter into Bhutan. Historically the region was administered by the Gyadrung stationed at Dewangiri.

Today the road from Trashigang to Samdrup Jongkhar, completed in the 1960s, connects the eastern and southern regions of the country, allowing them to benefit from trade, especially through trade across the Indian border. In the past Samdrup Jongkhar was the main trading center for the Bhutanese and it is still a convenient exit town for tourists who have arranged to visit the neighboring Indian state of Assam. 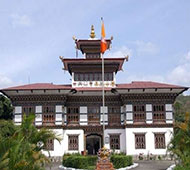 This Dzong serves as the administrative center of the district and is one of the newest Dzongs to have been built in the country. Unlike other Dzongs that are built on strategic locations atop mountains or between rivers, the Dzong in Samdrup Jongkhar is built on a flat and fairly wide-open area. 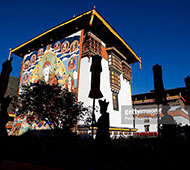 This Dratshang was only recently constructed next to the Dzong. It houses the monk body and has many new novices looked after by the religious functionaries.

This three storied temple set in the middle of town, is adorned with the work of the master Bhutanese craftsmen. Its intricate frescos and beautiful statues are truly a sight to behold. Due to its religious significance and convenient location Zangdopelri is at the heart of the spiritual lives of the people of this area. 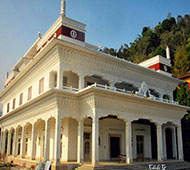 Dewathang is the site where Jigme Namgyal, the father of Gongsar Ugyen Wangchuck led the Bhutanese troops in a final battle against the British in 1884. Though the Bhutanese put up a strong resistance against the British, Jigme Namgyal ultimately signed the treaty of Sinchula with the British in 1865.The office of the Gyadrung, the district administrator was once located in this small town situated 18 kilometers from Samdrup Jongkhar. 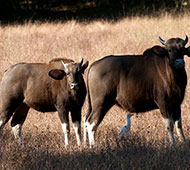 The only Mithun breeding farm in the east is located at Orong, along the highway reroute to Samdrup Jongkhar, above the town of Dewathang. The Mithuns are considered the finest breed of bison in Bhutan and it will be worthwhile to stop for a while to observe and photograph magnificent animals. The Mithuns raised here are supplied to the farmers of the six eastern districts. 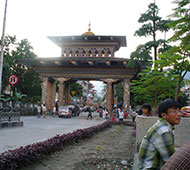 The town in Samdrup Jongkhar is one of the oldest in Eastern Bhutan and has seen gradual development over the years. It is a bustling little town with shopkeepers and hawkers coming from the nearby border of Assam to sell their wares. It also houses the oldest cinema theatre in the country that is popular among the Assamese from across the border for the Bollywood films it screens. 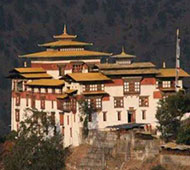 Trashigang Dzong or ‘The Fortress of the Auspicious Hill’ was built in 1659, to defend against Tibetan invasions. This imposing fortress is strategically situated high atop a spur overlooking the Dangmechu River. According to legend it is said that upon seeing the Dzong, invading Tibetan armies remarked that the Dzong was “not on the ground. It is a Sky Dzong” before retreating. It has been the political stronghold of Eastern Bhutan for over 300 years.

Mount Meru is the site of the palace of the Druk Chhoglay Namgyal (victory of Bhutanese Over enemies in all directions). It is accessible only from the north, via a narrow road, paved by blasting through the cliff-side. Due to its location Trashigang Dzong is one of the most strategically placed Dzongs in Bhutan. The present Dzong was enlarged by Dzongpon Dopola, in 1936. 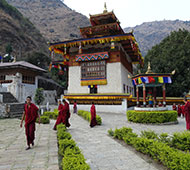 24 km. from Trashigang, the temple of Gom Kora is set on a small alluvial plateau overlooking the river. Surrounded by rice fields and clumps of banana trees, it looks like an oasis in an arid landscape. It is one of the famous places where Guru Rinpoche meditated in order to subdue a demon which dwelt in a huge black rock. 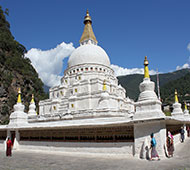 This dazzling white stupa is situated on the riverbank below the town. Constructed in 1740 by Lama Ngawang Loday, it is built in the same style as Bodnath Stupa in Nepal, with eyes painted at the four cardinal points. During the second month of the lunar calendar there is an interesting celebration here, known as ‘Kora’. 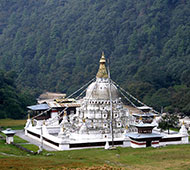 A pleasant walk of about three hours from Chorten Kora, Bomdeling is an annual migration place for black-necked cranes, which fly over from nearby Tibet to pass the winter months in a warmer climate. 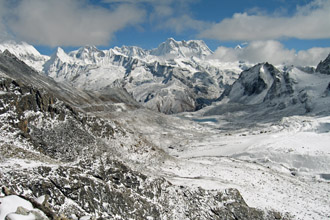 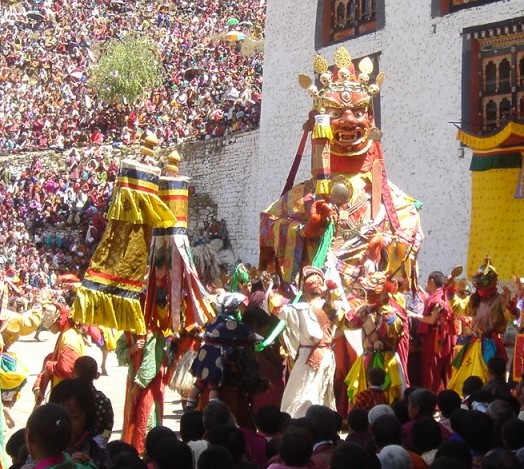 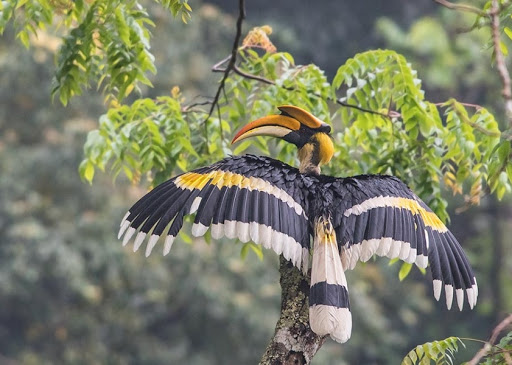