The name of Dooars came from the word ‘duar’, which is some Indian languages means ‘door’. This entire region of 8800 sq km truly serves as a doorway to Bhutan, hill areas of North Bengal and the Northeast India. Dooars is elevated from 90 m to 1750 m and holds a large forest area with numerous flora and fauna of various species. Besides, there are places which are religiously and historically very much significant. Travellers from all over the world visit this region again and again for the rich wildlife in national parks, reserves and sanctuaries.

Places to visit in Dooars 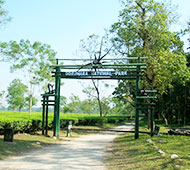 This national park is located on the floodplains of Jaldhaka and Murti rivers. The star of the large variety of flora and fauna in the park is the Indian one-horned rhino. Covering an area of 80 sq km, this area probably receives the largest tourists in Dooars and offer huge tourist accommodation and jungle safari service to them. 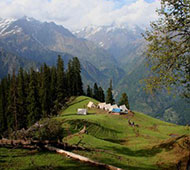 A memorable uphill journey towards Samsing provides a picturesque view of Dooars and takes to a pleasant weather on 3000 ft altitude. Tea gardens through rolling hill slopes, quiet ambience, and beautiful jungle is the speciality of this location. It’s an ideal site for the lovers of nature. 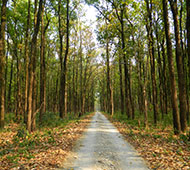 The small forest village Lataguri falls under the district of Jalpaiguri. It is located outside the Gorumara National Park. This region is developing as a hub for Dooars tourism and providing lots of facilities to the tourists. The Nature Interpretation Centre nearby offers huge information about the flora and fauna of Dooars range. 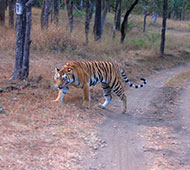 The forest of Buxa is famous for its tiger breeding and preservation programme. This reserve is at Alipurduar district of West Bengal, alongside the border of Bhutan. Apart from the wildlife, there is the Buxa Fort and Mahakaleshwar Jyotirlinga Mandir, which are tangled with the historical and religious fields of Dooars. 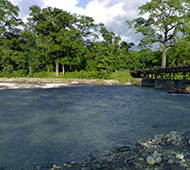 One of the most beautiful and beloved rivers in Dooars is River Murti. It flows through Neora Valley National Park and Samsing and eventually meets Jaldhaka River near Gorumara National Park. Except monsoon, the river is perfect for picnic alongside or to be crossed on foot throughout the year. 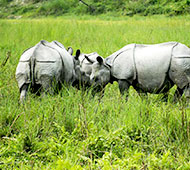 The wildlife sanctuary of Jaldapara is home to Indian one-horned rhino, Asiatic elephants, Indian bison and many other animals and birds of endangered species. This forest area was labelled as a wildlife sanctuary during British era and later the Union Forest and Environment Ministry announced it as a national park. 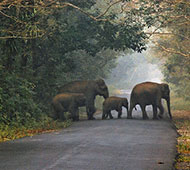 Chilapata is not only known for its wildlife sanctuary and jungle camp, it is a corridor for one-horned rhinos and Asiatic elephants to travel between India and Bhutan. Situated between the areas of Buxe Tiger Reserve and Jaldapara National Park, the forest has a place where the ruins of the fort of Nal Raja and bloodlike liquid spilling trees around it can be seen.